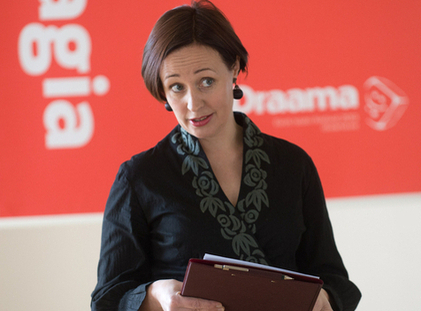 The magic of space for me is a special kind of innate performance space in theatre - the something which arises in the theatre hall from a successful collaboration between the director, designer, composer, lighting designer, actors and other creators.

Usually people do not examine things in detail and the knowledge that ink is blue, the sun is yellow, snow is white and mud is  brown is enough for them. Studying fi ne arts trains you to look at  things directly and without intermediaries, any previous knowledge, preconceptions or rational fi lters. I got used to sensing the  magical second scheme behind every line, form, space and activity.  As an artist, I have created spaces all my life. At fi rst, I aimed at  pleasing the eye but now, as a more experienced artist, I have  come to value the synergy between diff erent senses and art forms.  I understand now that the space becomes magical when your eyes  start to listen, ears begin to see and the words and visuals create  an explosive harmony. The magic of space does not refer to an  illusory stage which is created to trick your eyesight. The notion  denotes a self-breathing macro world which has its own rules. It is  a space governed by a twisted reality where everything can happen and where the rules of physics do not always apply.